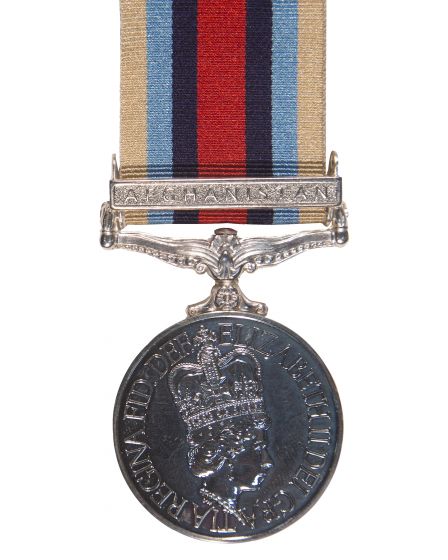 This Medal is an Official product that is 100% made in the UK, Die Struck and Medal Office Approved

Silver and circular in shape. The obverse of the medal shows the crowned effigy of Queen Elizabeth. The reverse bears the Union Flag, surrounded by the inscription ‘For Operational Service’ and the 4 major points of the compass, with 4 Coronets: Royal (top left), Naval (top right), Mural-Army (bottom left), and Astral-Royal Air Force (bottom right).

‘Afghanistan’. Awarded with the Medal for service specifically in Afghanistan. When the ribbon alone is worn, a silver rosette denotes award of the Clasp.

A broad central red stripe, flanked each side by a stripe of royal blue and one of light blue, to represent the 3 services, with an outer stripe of light brown to reflect the landscape of Afghanistan.

Complex criteria govern the award of this medal, with varying lengths of service required depending on the operation and location.

To qualify for award of the Medal with Clasp, personnel must have served in Afghanistan for either 5, 21 or 30 days continuous service between various dates depending on the operation, from 11 September 2001 to 1 August 2002 for Ops Jacana and Bandog, or to a date to be decided for Ops Veritas, Fingal and Landman.

Service of varying lengths depending on the operation on Ops Landman, Veritas, Oracle, Ramson or Damien in other Middle East countries during certain specific dates will qualify for the OSM for Afghanistan without clasp.

The new OSM was introduced on 1 January 2000 and at the same time the GSM was discontinued, with the exception of the award of the GSM for Northern Ireland.

Since its introduction, 3 OSMs have been issued: for service in Sierra Leone, Afghanistan and the Democratic Republic of Congo. Although each OSM will look the same, separate ribbons will denote each separate award.

A Clasp may be awarded with the OSM to signify service in a more dangerous area or period of conflict.